The Sphinx by Edgar Allan Poe 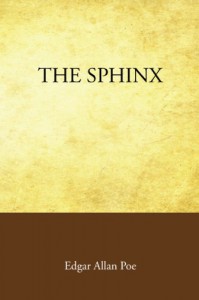 Well, this is the beginning of my Edgar Allan Poe reading. I started with “The Sphinx” because it was toward the beginning of my ebook copy of the complete stories. I pulled out the giant print book I have and I’ll probably go in that order from now on. I’m going to try reading some of the poetry too, even though poetry isn’t usually my thing. I’ve read a few of Poe’s popular poems, and liked them.

I really enjoyed the introduction to this leather bound edition. There were plenty of things about Poe’s works and life that I didn’t know before reading that. For instance, I had no idea that Poe’s work was highly criticized in the right after his death due to a nasty obituary written by Rufuz Griswold. To me, Poe has always seemed like one of those great writers that everyone recognizes at great. It’s hard to imagine so many people criticizing his work due to what amounted to vengeful gossip. I think what’s most exciting about reading Poe’s works is how much his writing influenced so many other people. He inspired a plethora of other writers, as well as some notable musicians. I can only assume I’m not the only music history buff who wishes that Debussy had finished The Devil in the Belfry and The Fall of the House of Usher. And even though I claim that I’m not into poetry, I was a little obsessed with Paul Verlaine for a bit. I know he and other symbolist poets in his time were greatly influenced by Poe. As always when reading what I pretty much regard as literary genius, these “reviews” will be less critique and more reflection. Because of that I’m not going to rate them.

“The Sphinx” is about a man who flees to the country to stay with a friend during the cholera epidemic due to the fear that he will be the next to die. Even away from the disease, he can’t seem to get rid of his dear that death is coming for him.

This was definitely an interesting story to begin with. Most of my Poe exposure is due to high school literature classes, and those readings are usually centered around Poe’s Gothic stories. While death is certainly a topic in this story it’s not really the theme. This is about paranoia and fears taking over our common sense. The narrator is so blinded by his fear of death, that he sees it coming for him where it doesn’t exist. He allows his mind to play tricks on him. When I began reading, I appreciated Poe’s style, but I was failing to see where the story was headed. In the end, I got a little chuckle out of it. Poe is always associated with the dark and eerie. It’s nice to know he had a sense of humor, even if it was a little on the dark side. The story actually reminds me a little of Jane Austen’s Northanger Abbey. While Catherine isn’t plagued by a fear of death, she lets her imagination get the better of her thanks to all the Gothic novels she reads. This was an enjoyable story, but nothing truly great. I know those are awaiting me. 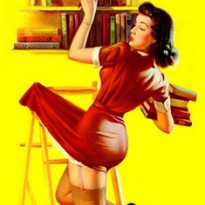